This project harks back to 2015 when I was asked by a teacher at the dance studio if I would be able to make her dress for a wedding that she was Best Woman at. Yes, that’s right best woman to the groom  😁  I agreed . . .   and then, as happens sometimes, one dress became four dresses! How so? Well, the three bridesmaids were having trouble finding anyone to make their dresses. There was one thing to consider in that only the best woman lived in Wellington. Where were the bridesmaids living? One in Auckland, one in Christchurch and, wait for it, . . . one in London, England!

Hmmmm. This needed a little thought! Since I had been asked well ahead of time once I got my head around a few logistics I felt it would be o.k. to go ahead. The best woman and two of the bridesmaids were apparently similar sizes which would make things easier. Also the dress pattern was the same for the four of them.

Here is the pattern below, View C with a sash tied at the back. A link to the updated version is here 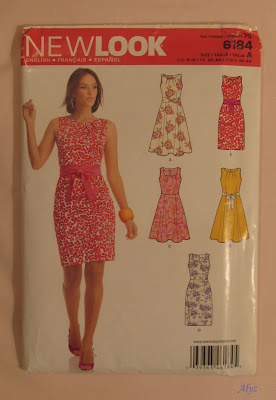 I checked on Pattern Review to see if this pattern had been reviewed and it had. Reading the reviews was helpful as there were a few things I could watch out for when fitting the toile.

First up I measured the best woman. I then tinkered with my measurement chart in Excel to highlight the measurements that were needed and put an X in the boxes that weren’t necessary. I developed my chart from a combination of a couple of charts, one being a standard measurement chart the other a specific tutu measurement chart. Since I make all sorts of things it is handy to have all the different measurement possibilities on my chart.

Once the tinkering was done I sent the chart by email to the Christchurch and London girls along with a set of instructions in how to measure, with some diagrams as well for good measure. The Auckland girl was down for a weekend so I was able to measure her in person. When a couple of weeks had gone by and I hadn’t received a return email from London I emailed again, this time remembering to mark it high priority. Just as well as my first email had gone into cyberspace!

While the emails were winging their way about I got on with the toile of the dress for Miss A, Best Woman. Here it is below, and the fit was pretty good! From that I was able to make the necessary adjustments for the other three girls, once I had all the measurements in hand. 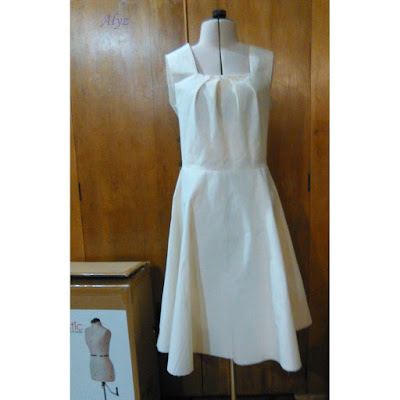 Then came one of the fun parts. The toile for London was sent by “tracked and signed for” courier, as was the Christchurch one. The cost of these was covered by the bride. Miss A was traveling to Auckland so was able to take that one up and bring it back with her. Again I sent instructions, and asked the girls to take photos for me when they fit the dresses. I was glad I had as it made a big difference being able to see the dresses on their bodies.

The two that had been sent by courier were returned pretty promptly and in the case of the London one within about three weeks. The fit of them all was pretty good, a bit on the large size so needed taking in, but better than the girls needing to figure out how much to add in!

All that done it was time to move on with the actual dresses. These were of . . . chiffon! and lined of course. I do not know what it is about chiffon and I, it seems to have a dangerous attraction to me!

The best woman’s dress was grey with a lavender sash, the bridesmaids were lavender with a grey sash. One thing I hadn’t made before was a lined sleeveless dress with an invisible zip. I did have a lesson with Andy G to go over it as I learn best by watching and doing. For good measure I found this video online which I found really helpful as I was able to watch it several times and pause it when needed while I was actually sewing the first one. I also did a test run with some of the scraps . . . better to stuff that up than mangle the dresses!

I took a lot of photos whilst making these dresses, and they are some of the “lost lot”  😒  I had posted some on Instagram and found them on my phone so have a few. Below is Miss As’ dress on Hetty before the final fitting for the hem. 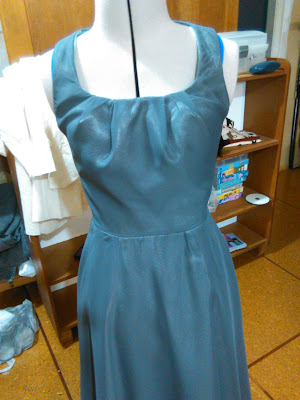 I was able to get Miss A’s dress sorted and finished without too much stress. I had been given to understand the bridesmaids would all be in Wellington around a week before the wedding, which was on 28 December. In actual fact the earliest they were all able to be available was 26th December! So that afternoon I did the first actual dress fitting. Below is the photo of the girls after I’ve done a bit of pinning. They still needed a fair bit of work! The little white tags have their initials on to make it easier to tell the dresses apart, especially Misses V & R.

The next day, around 9;00 pm or so in the evening, I was able to do the 2nd and final fitting for the hems! There had been a pre-wedding rehearsal and dinner, plus I hadn’t got as much as I wanted to done – I needed to grab a few hours sleep after all!

I think from when I did the first fitting to dress handover was about 46hrs and we were down to the wire!  😅  The finishing takes time, under-stitching facings, hand stitching the shoulder seams of the linings closed, and the lining to the zip, handmade eyes for the hook on the back of the dress. But they did get done! Below is one of the finished bridesmaid dresses complete with sash. 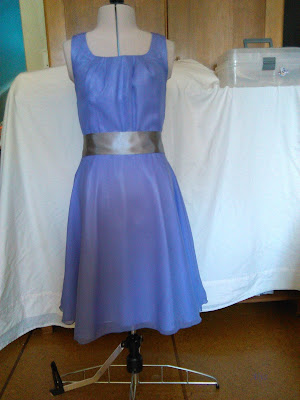 I hope to receive some photos from the wedding at some stage. For now these will need to suffice. I learned so much from this project, not just sewing technicalities either!

One thing I know for sure – if ever asked to do anything like these again I would ask more questions and only agree if the wedding attendants were all in the city and available for fittings at least a week before the wedding! One lives and one learns  😎