I’ve gone back in time a bit to the end of last year. Continuing with my catch-up posts.

The last costumes were more leotards for Rachel Compton Dance Studio. This time for the older girls, and a cabaret style was needed. I was provided with a few images of the type of thing Rachel had in mind. These are my rough sketches – art not being my forte.  😐 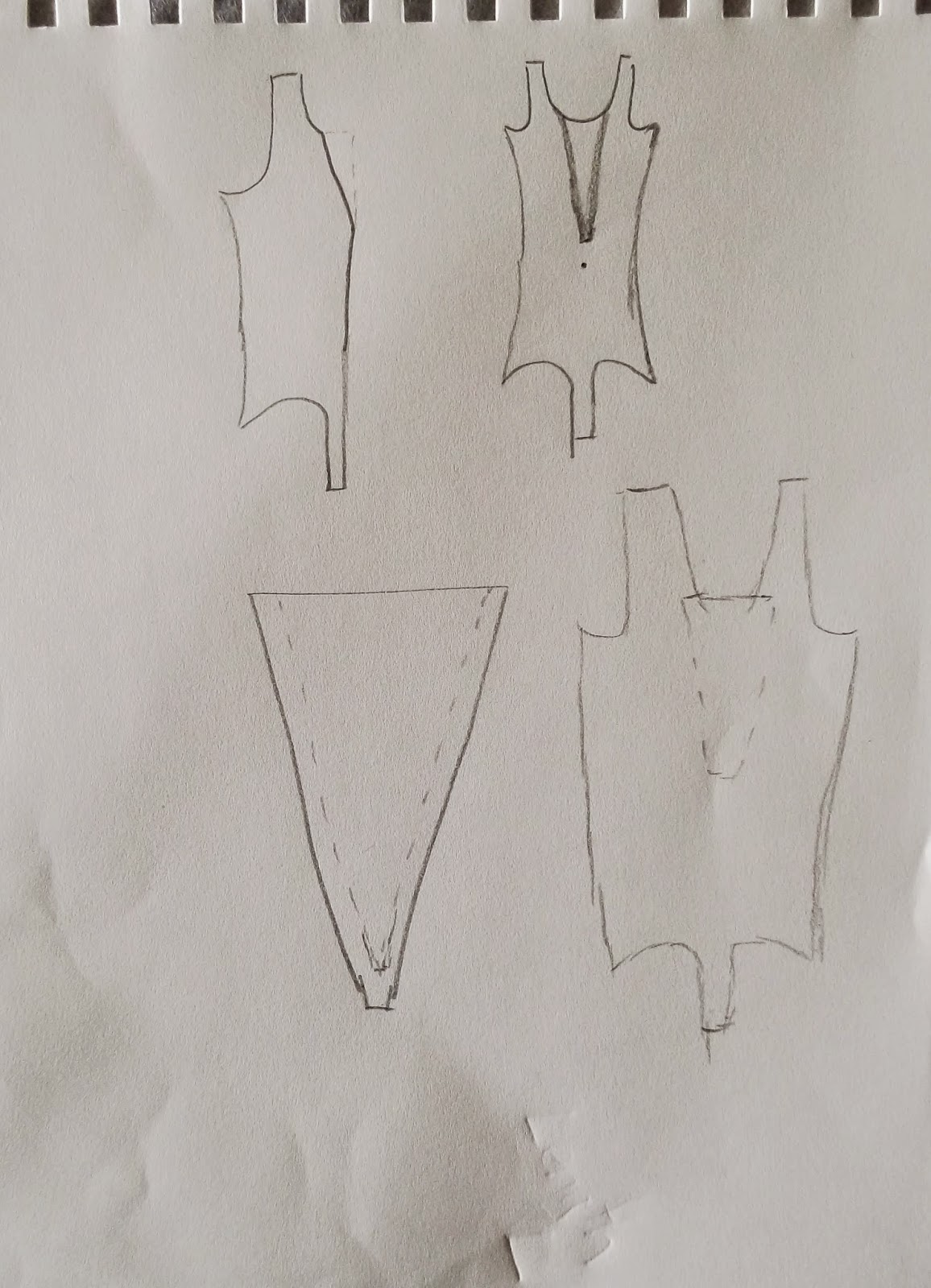 First off was making a mock-up. I used a cheap lycra from Pete’s Emporium. O.k. for mock-ups but not what I’d want to sew for the real thing.

Before the sewing there was sorting out the patterns. I used Kwik Sew 2310 as a basis – partly because I had some of the sizes already traced.

I’ve been collecting these patterns for years, only ever trace off the master patterns and am really glad now that I haven’t cut into them. 1) I discovered recently that Kwik Sew now use tissue – most of my patterns are the thicker paper which I prefer. 2) Many of the Kwik Sew patterns I have are now out-of -print and this one didn’t even show up on the OOP Kwik Sew page!

One of the sizes I’d traced off was a large. I’ve never used it and it’s around 10 yrs since I traced it off so time to re-use. I resized it as I did need a medium. 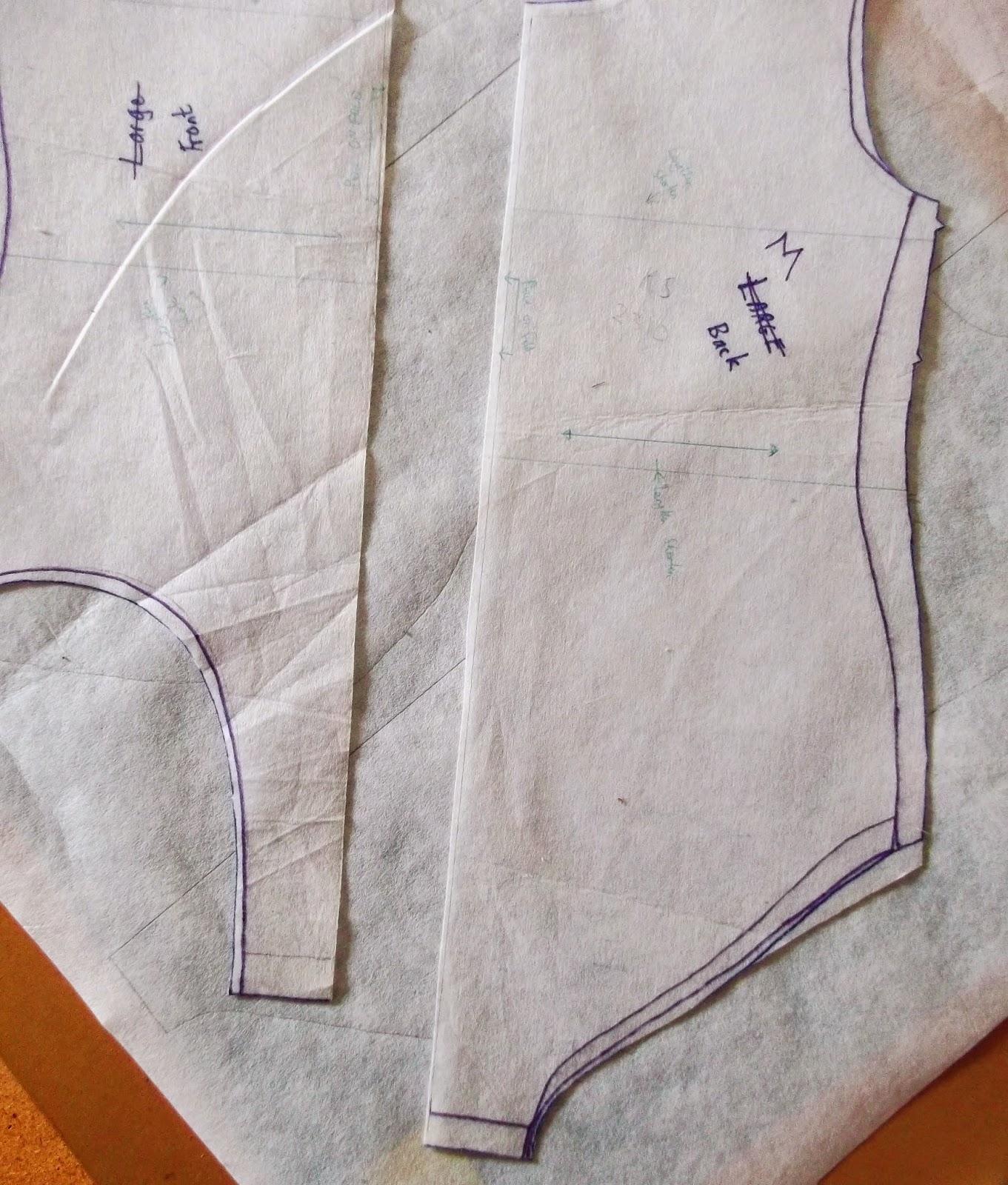 Then traced of and modified the other sizes 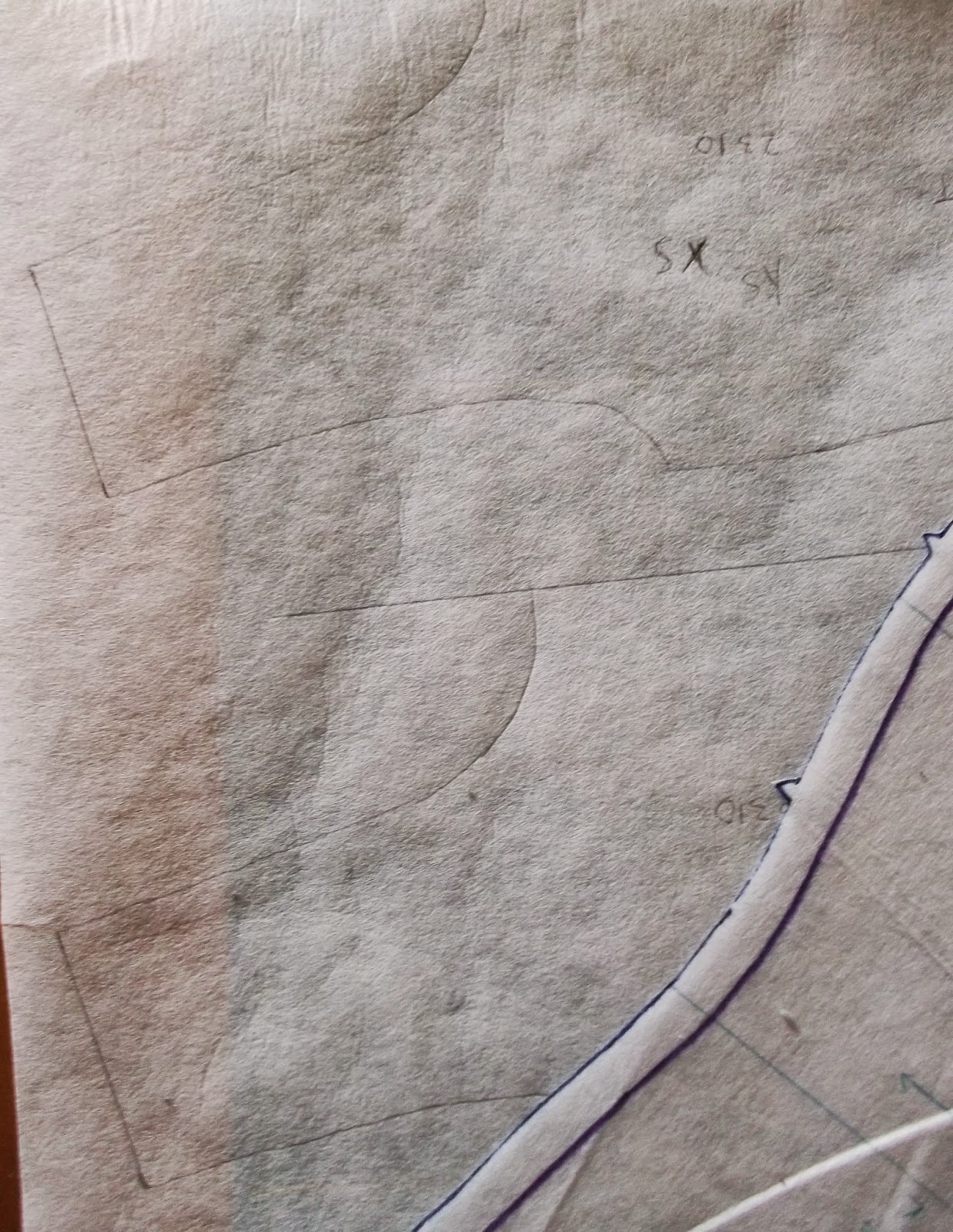 Next it was on to cutting out the mock-up. My cutting mat is underneath which is why it looks a bit lumpy! 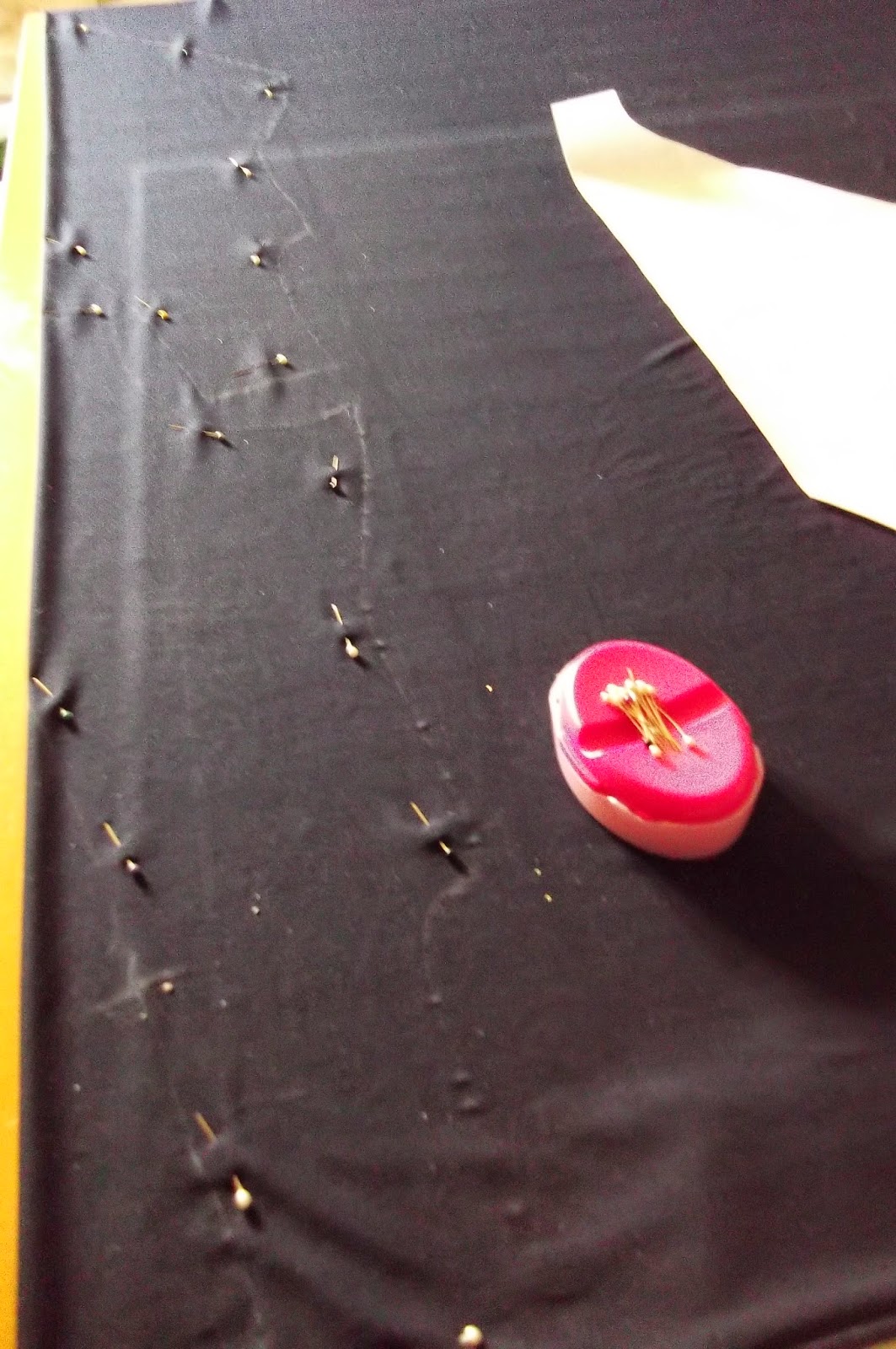 Then it was on to figuring out the insert – I was winging it even though I had sought some advice and been sent some information and pictures by leotard and tutu maker, Dani Legge, in Australia. Her method was almost what I needed but I tweaked it slightly as I needed a finished edge on the outside. 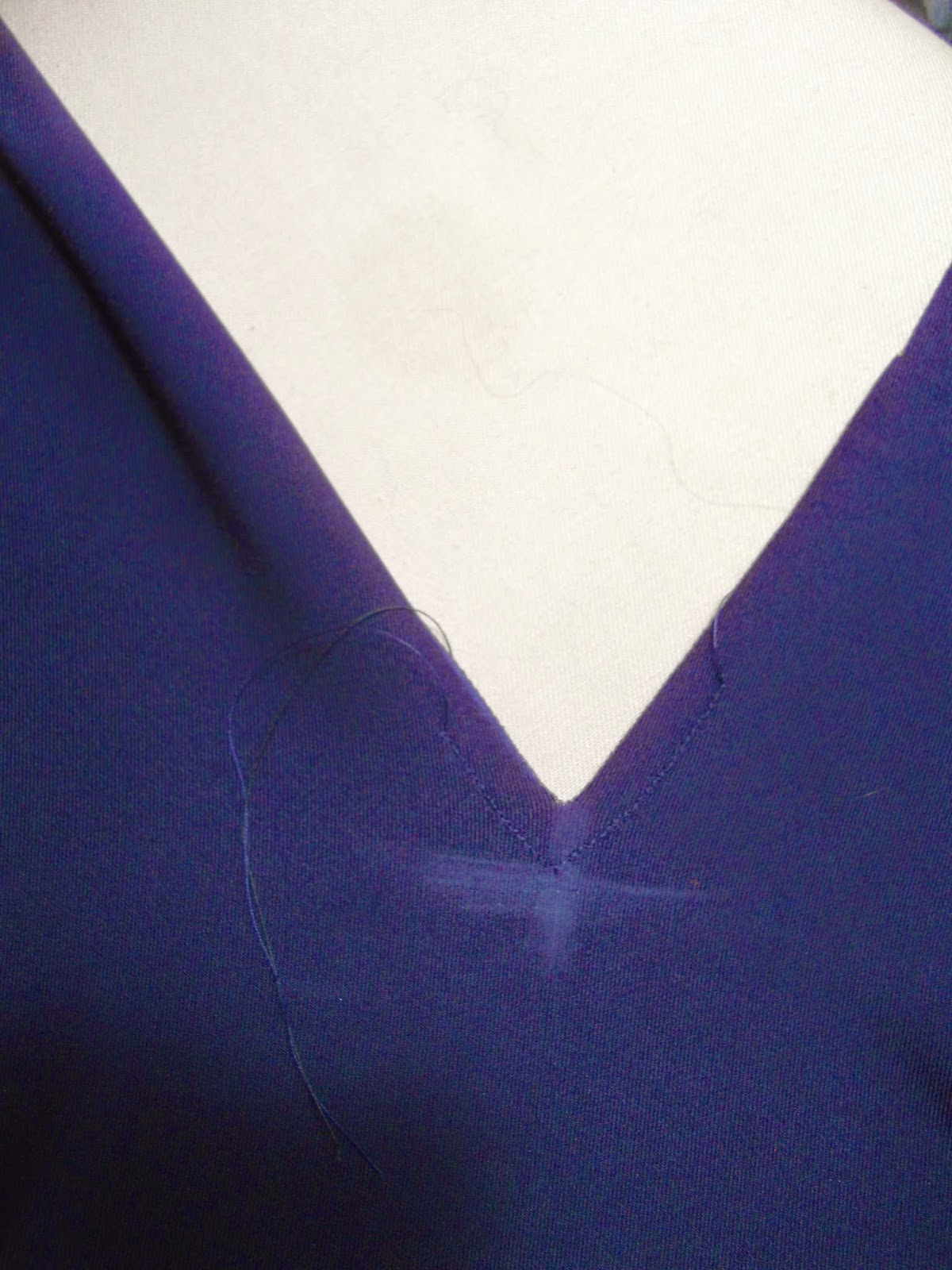 First I stay-stitched the point of the V so it wouldn’t tear when I snipped it after attaching and turning the insert. Think my tailors chalk needed sharpening  :”>  There was discussion on how low the V should go and how wide it should be – these are young girls after all and I find most girls, and their parents, prefer being covered. Plus the dance concert is a family show. 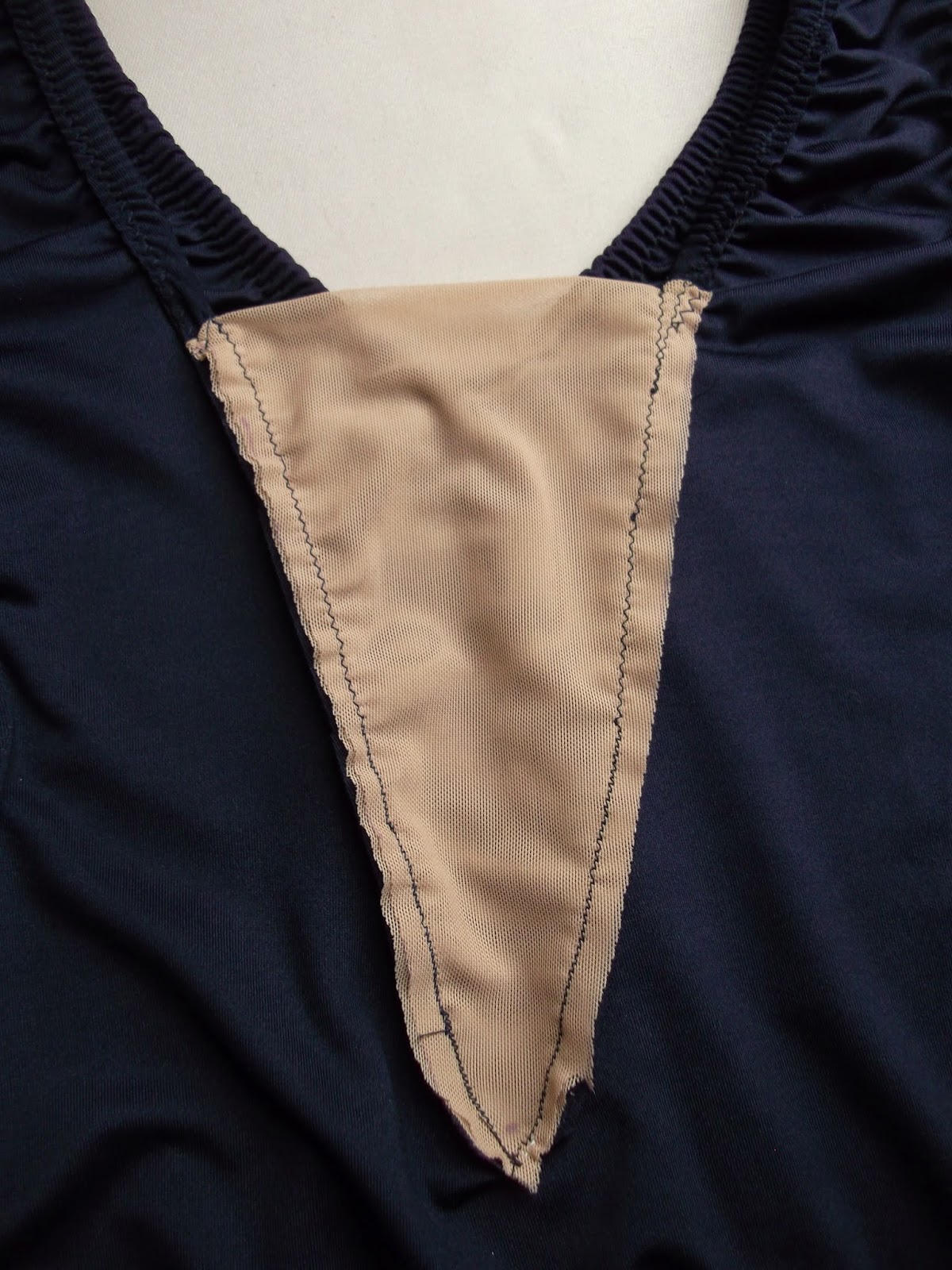 The insert from the inside – not neatened, but it’s o.k. since it’s a mock-up. 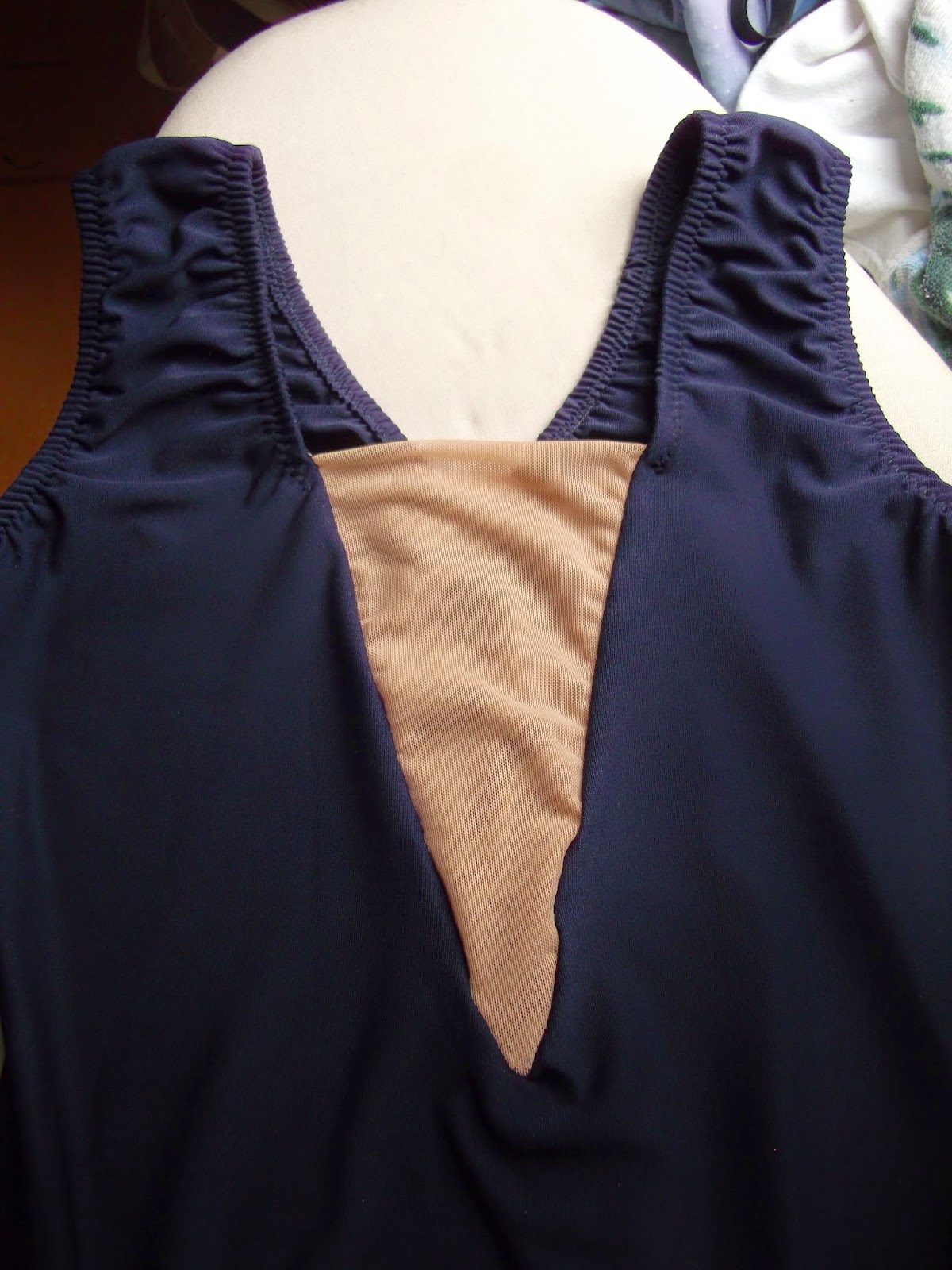 From the outside. It looks a bit puckered but I was confident that would come right once the leotard was on. 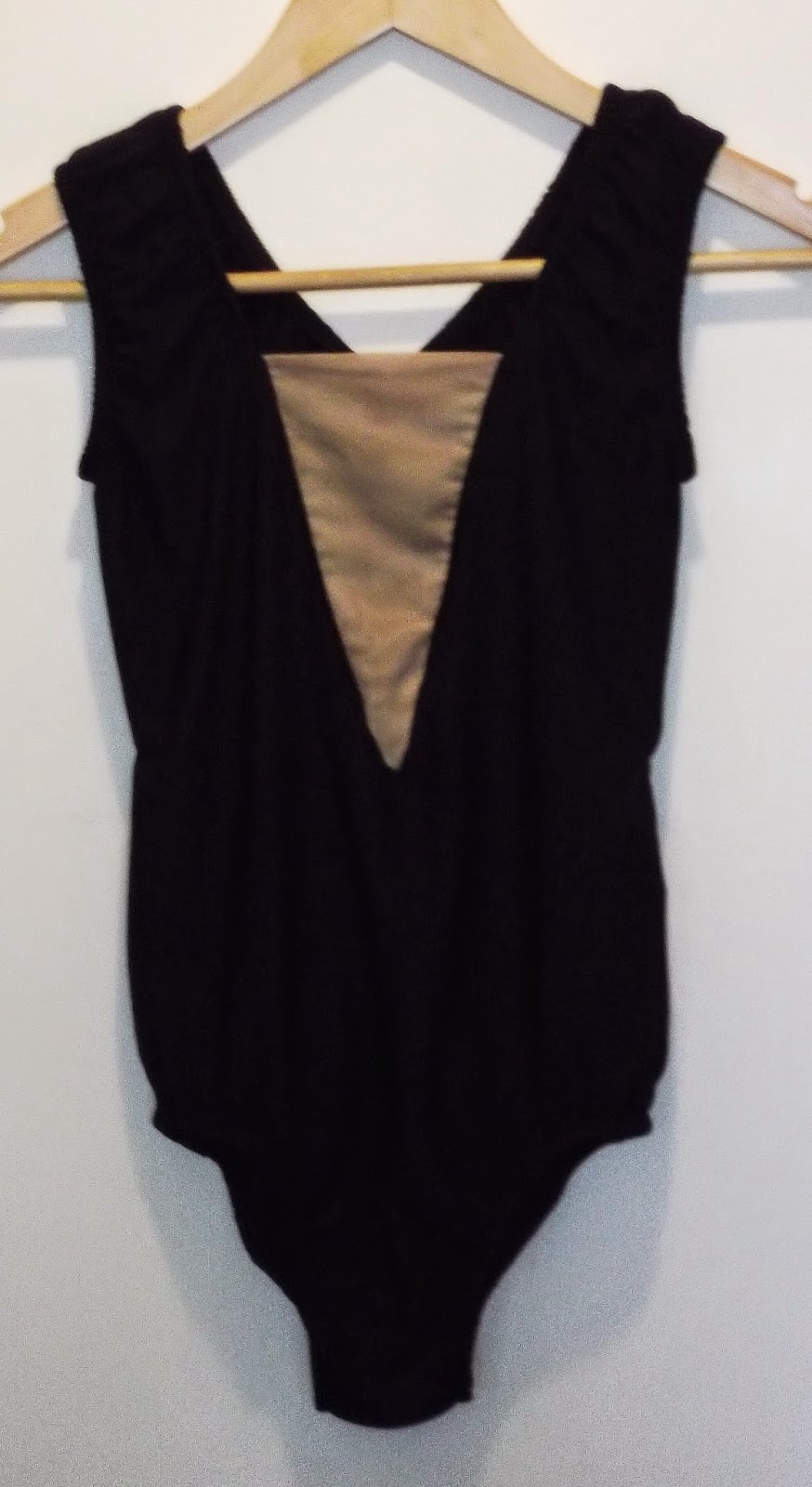 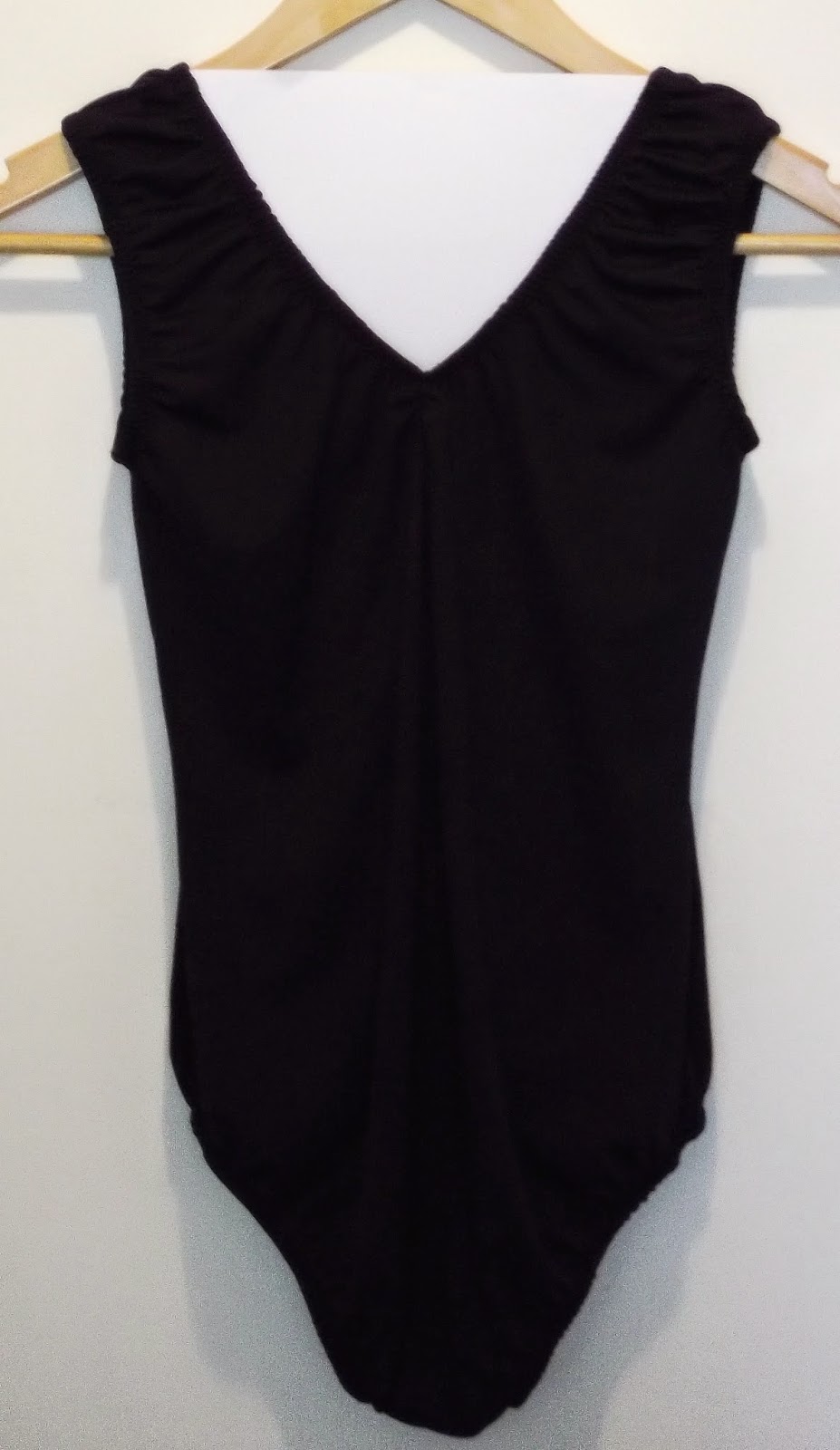 From the back – the piece of paper is there to make it easier to see the back V in the photo. 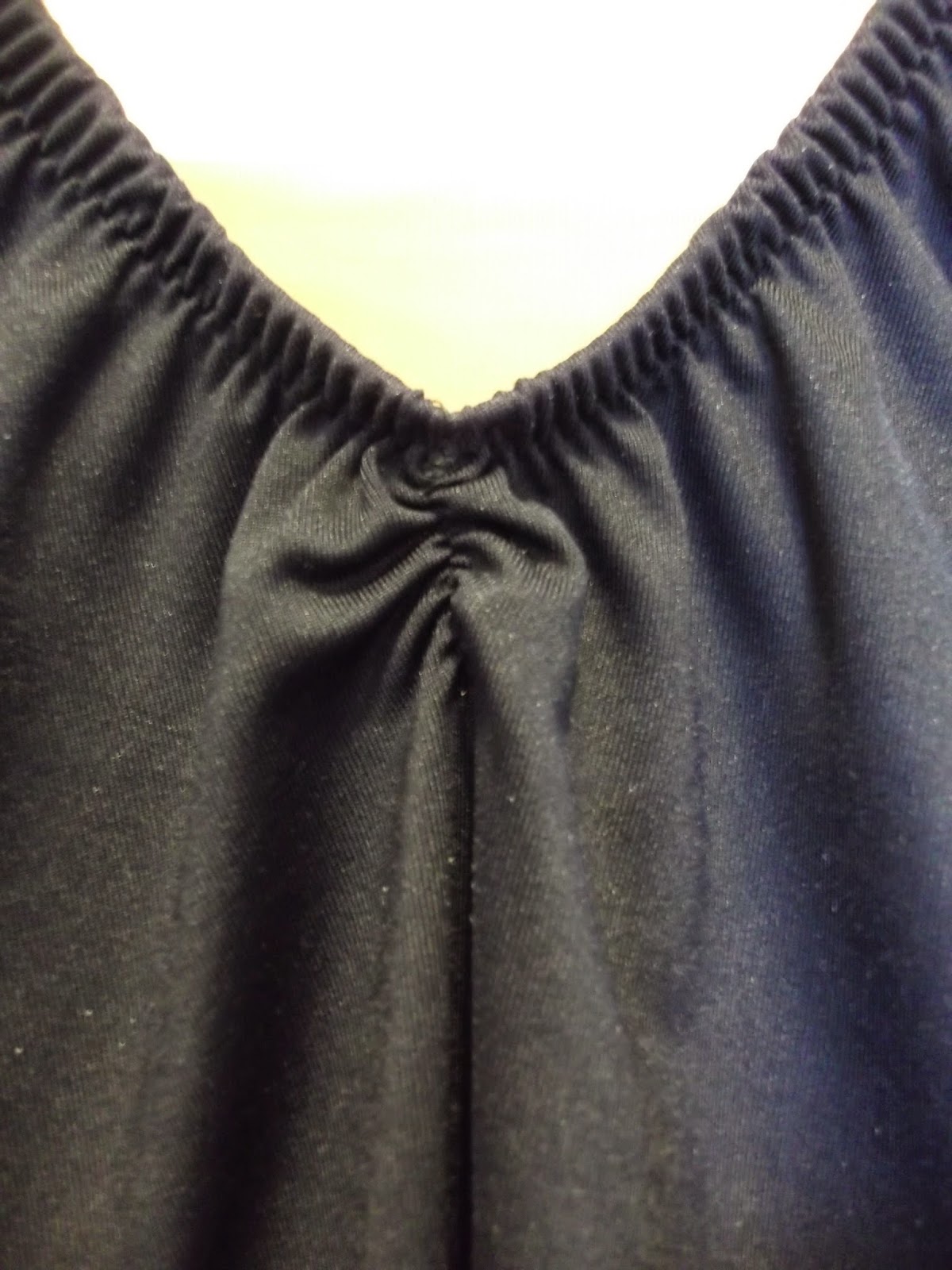 Close up of the gathering detail at the base of the back V.
While I was making the mock-ups I was thinking idly about the fabric. There was fabric for all the Flower leotards as well as for these leotards. Something was nagging at the back of my mind though. I pulled out the fabric for these and immediately thought, “Jiminy! There’s not much here!” and promptly measured it. Yikes! Only 2 metres! I sent a text to my friend along the lines that although I was pretty economical with cutting out no way could I get seven leotards out of 2 metres!
A week or so later another 4 metres arrived  🙂

There were a few things that needed to be tweaked after the fittings, which my friend did, of the mock-up. The shoulder straps needed to be a bit narrower, the back V lowered around 2.5cm and one girl needed a slightly higher leg line.

Adjustments made I began cutting. 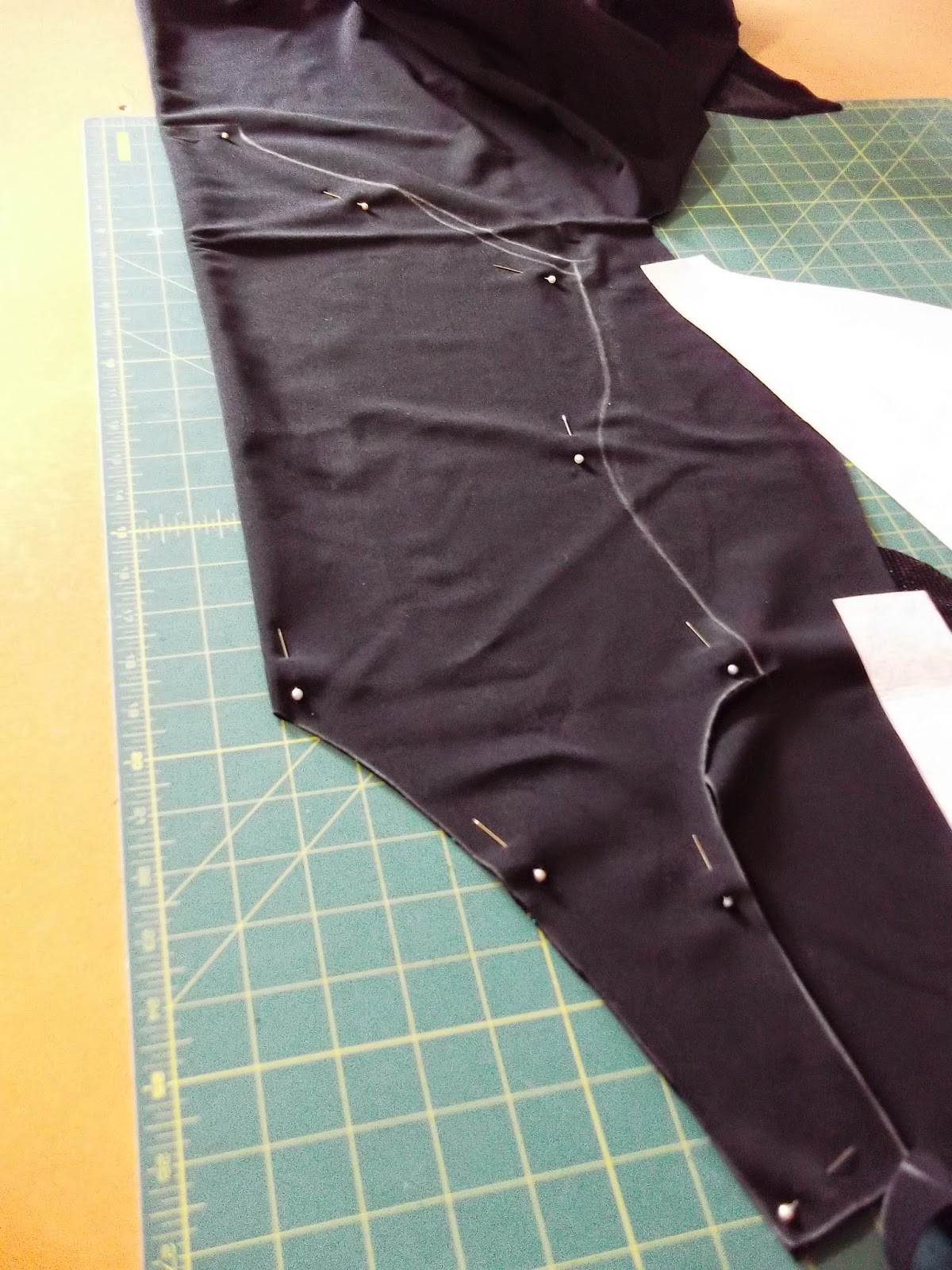 One of the back pieces 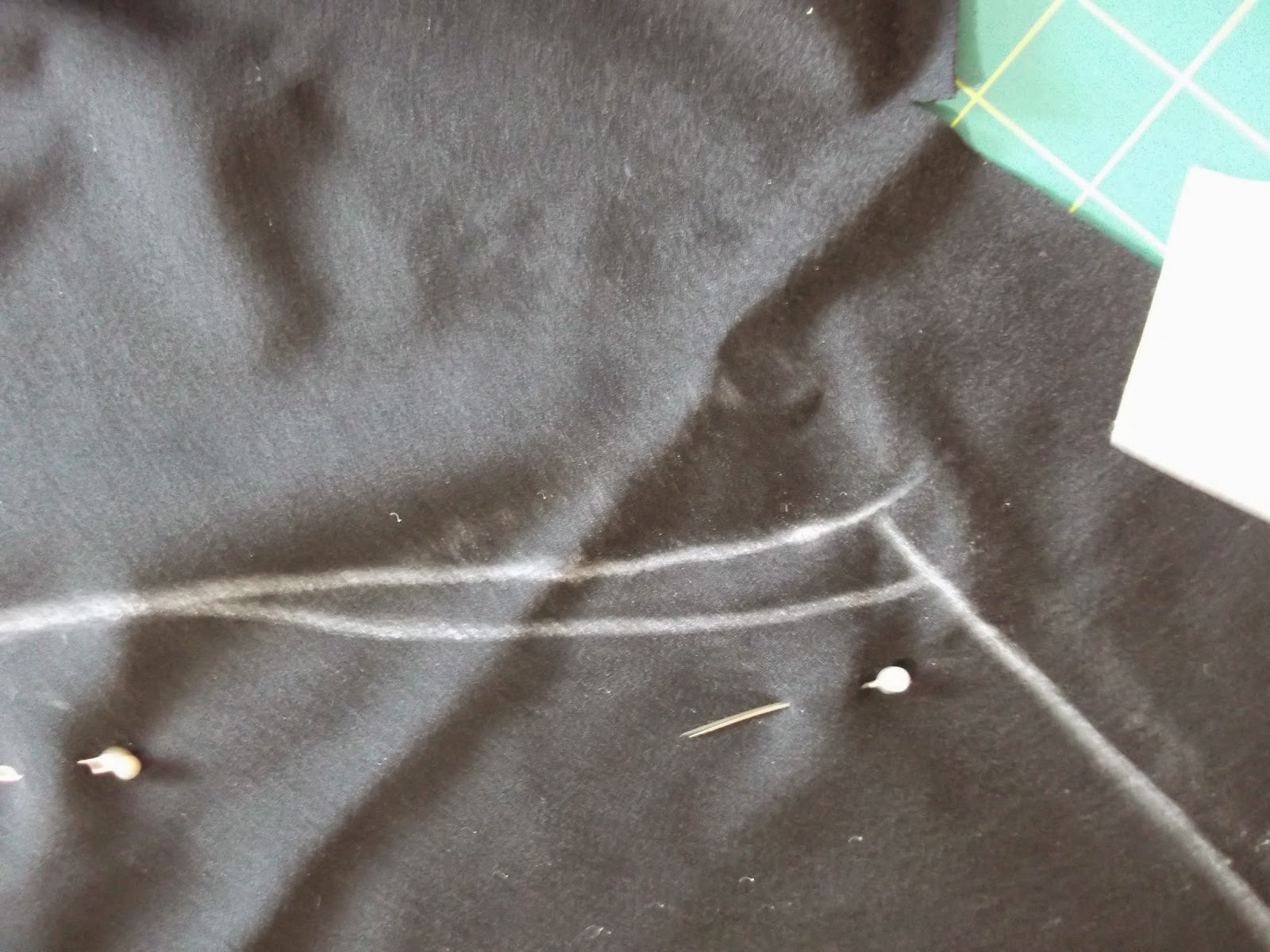 Raising the legline around 1.5cm on the one leotard. Doesn’t need to be much due to the stretch factor. Take too much off and it will end up too high. 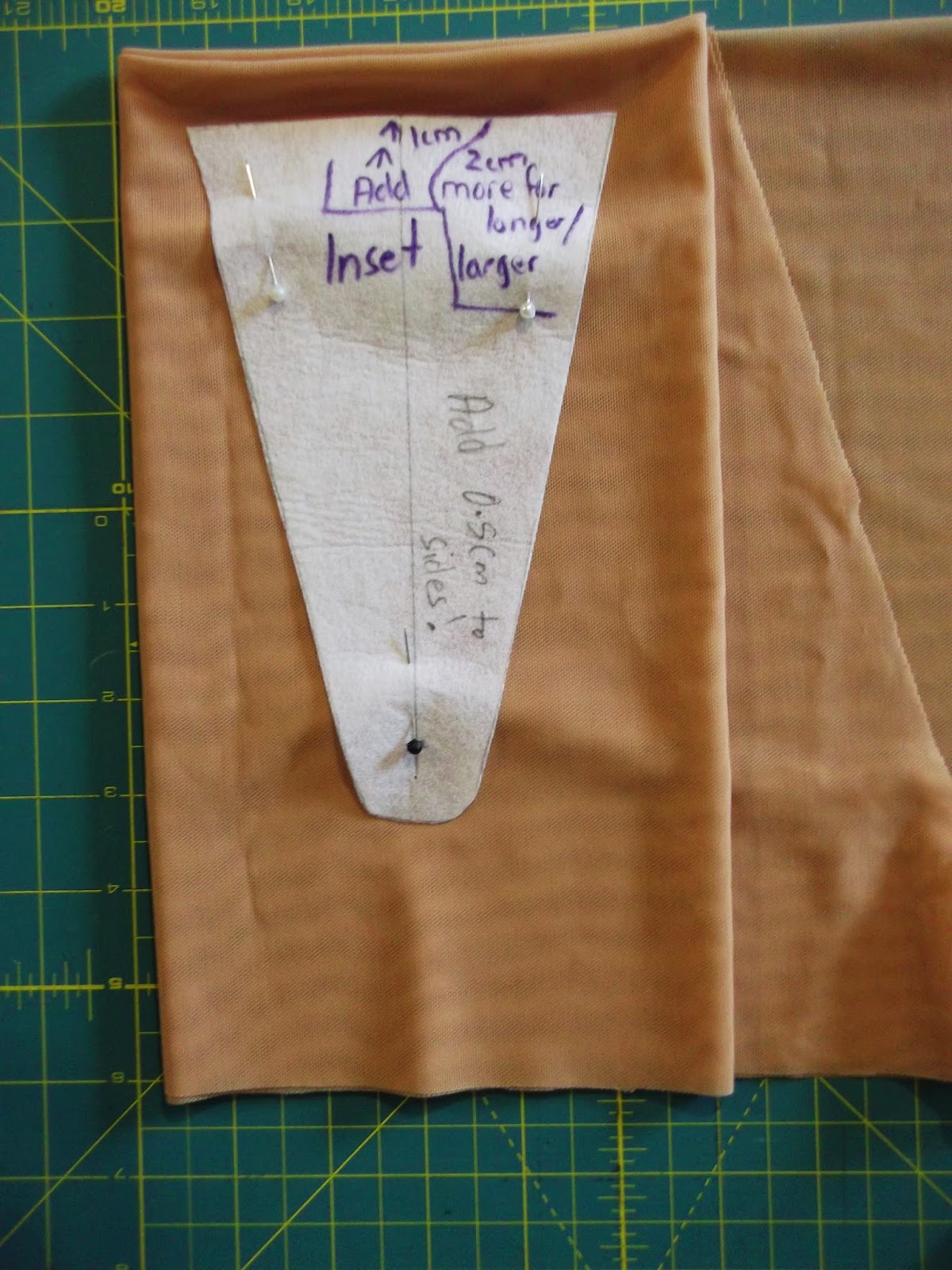 Cutting all the inserts out. They are all double thickness powernet. 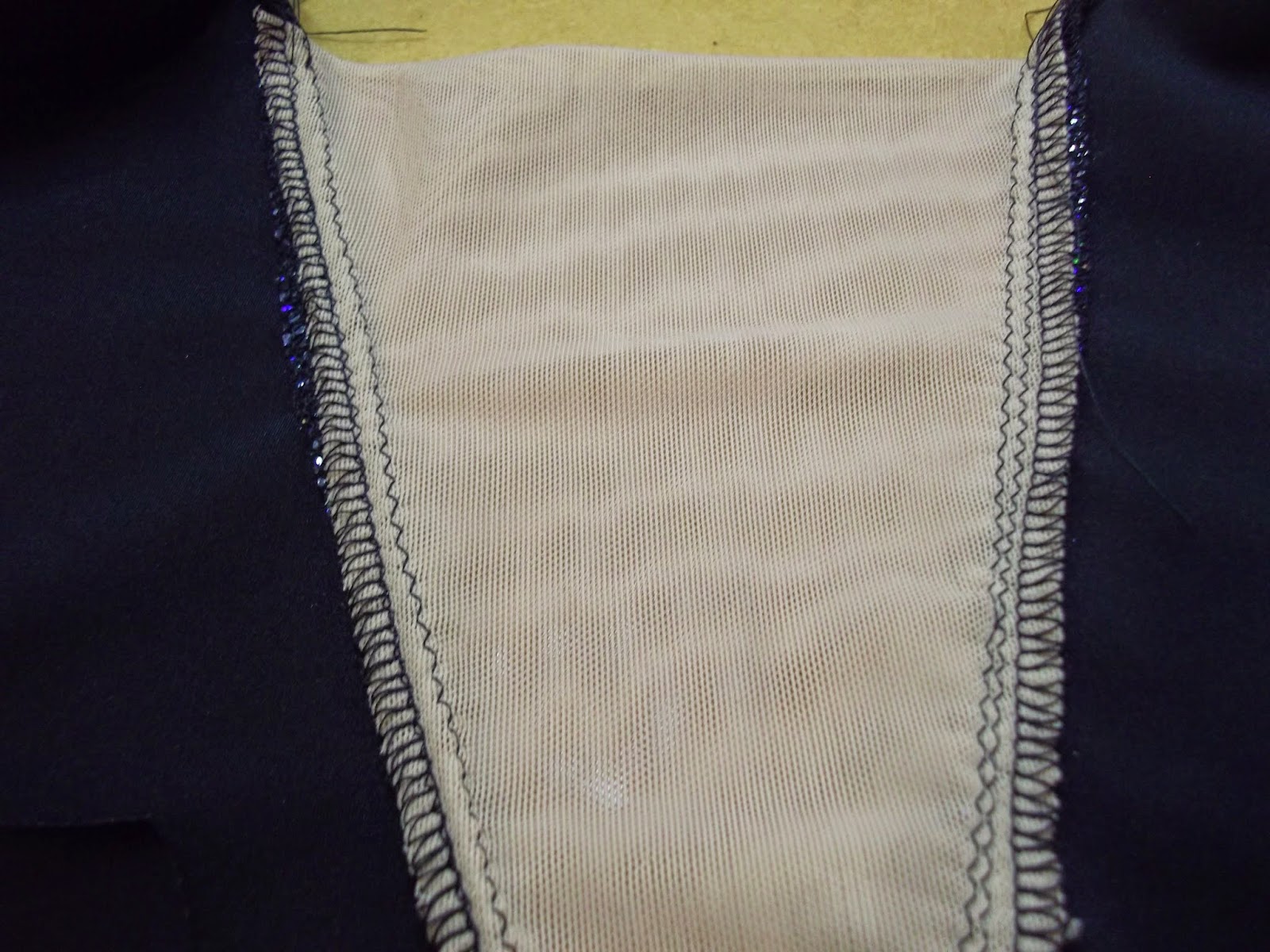 I used zigzag stitch to sew the inserts in so they would retain the stretch. Overlocked the insides, then top-stitched from the right side so the V would sit flat, again using zigzag stitch. I’ve done the right side and took the photo before doing the left side.

Then all that was left was to hand them over. Fringing was added by the parents.

I was very pleased with how they turned out, as was my friend and, most importantly, the dance teacher, Rachel. 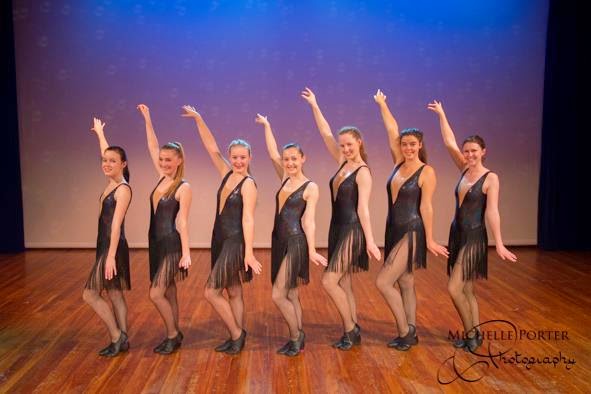