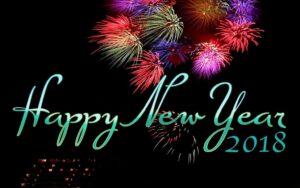 Yes, I do know it is March already but this is my first post for this year so Happy New Year dear readers!

Life has been busy, but not too frantic, since the end of last year when I last wrote a blog post. I’ve had a bit of a break from sewing, despite there being quite a lot of things to finish.

One of my aims was to de-junk, sort and organise all my sewing gear, fabric and doodads. Guess what? I got it all done! It didn’t happen  😒  But  that’s OK. I’ll get it done eventually!

Anyway I better get to writing about the sashes. If you really want to know what else I’ve been doing to fill in my time you can read about it on my other blog A Quiet Life but I assure you it is just your usual everyday stuff. Nothing scintillating at all!

When my dear Mum was young she joined The Girls’ Life Brigade which later became Girls’ Brigade, GB for short. It actually began in 1893 in Ireland, before Girl Guides which started in 1908. Girl Guides is larger and more well known but GB is still going strong.

Mum believed passionately in the aims of GB for girls and young women and moved up through the ranks. When she married and moved to Wellington she joined the 18th Wellington Company eventually becoming Captain of the company, a position she held for many years. My sister and I both attended the company and I spent time as Captain myself. Roll on a few years and we had a daughter, Smurfette.

We didn’t automatically send her to GB but in the end, for personal reasons, that’s where we enrolled her. Frosty and Locket followed along as they became old enough. These days Smurfette is Co-Leader of a company in Wellington.

So now you have the back story  😃

Over the years the uniform has changed as these things do. My Mum had a sash for all her badges. Then they went out of fashion, or just weren’t part of the uniform anymore which really annoyed me as I always thought it would be cool to display the badges on it.

Now they have reintroduced them and last year Smurfette asked if it would be possible for me to make some for the girls in her company. A young lass had joined who had a sash and we were able to borrow it so I could make a pattern.

They’re quite basic and easy to make and I enjoyed making them as they didn’t require too much brain power.  😌  Sometimes it’s nice not to have to figure out a complicated make, for me anyway. 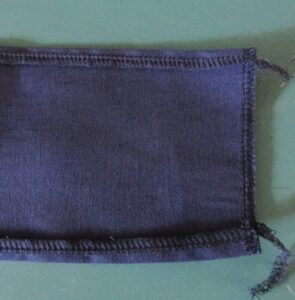 Here the sash has been overlocked on all four sides, and the sides turned in ready to hem. 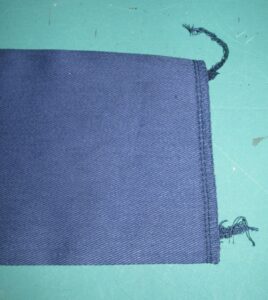 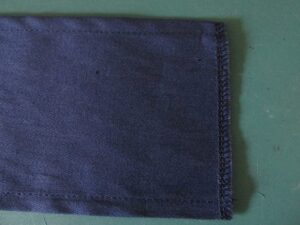 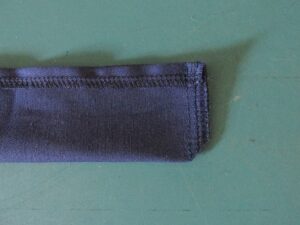 Folded in half, the end stitched and the corner clipped ready for it to be turned, which will give a triangular end to the sash. 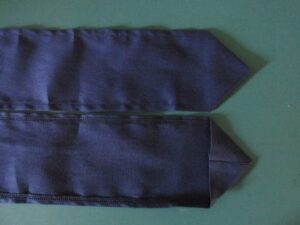 The two ends, showing the right and wrong sides. They got a bit rumpled with all the handling but a good pressing at the end sorted that out. 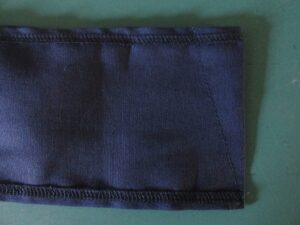 They also had to be angled so they would go across the body from the shoulder to the hip. This photo shows the stitching for that. 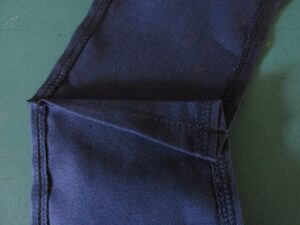 Pressed and the wide end stitched in the ditch to keep it flat. 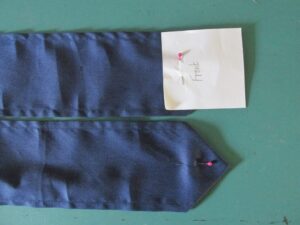 The label so I won’t muck up which way the velcro goes on each end. There were 21 sashes so I did not want to unpick them all if I got it wrong! 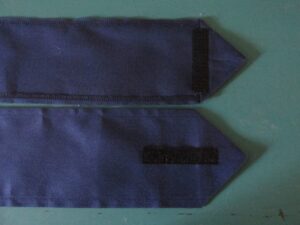 The velcro stitched to the ends. Then they got a good press before I handed them over to Smurfette. 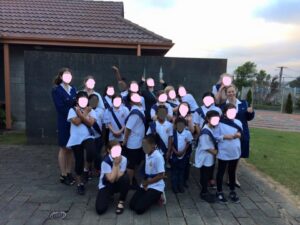 Here are the girls wearing them at the end of the year. Smurfette is the one whose face you can see! The girls were all pretty excited to get their sashes and put their badges on them.

I will be blogging this year and will try to be regular. I say try as I have made the decision to do a bit of study. Well, formal study as opposed to informal. I’m always researching and learning via books and the internet however there is one area I have always felt I would like more knowledge in. It’s the area of art. E.g. drawing, painting, colour, shading . . . all that kind of thing. I didn’t study it at school apart from the art we did in primary school, age 5 – 12. I’m great at stick figures and that’s about it!

I was given some information by a friend about a course and after much thought and prayer, and attending a free workshop the centre put on, I decided to take the plunge. Student Loan and all!
I am working towards the New Zealand Certificate in Creativity Level 4 through The Learning Connexion. I am studying as a distance delivery student, part-time, throughout this year, and part of next since I start this coming Monday, 12 March. I finish in February next year.
I’m excited but also a bit nervous. But learning new things will be good and to be stretched out of my comfort zone will challenge me which is what I feel I need in my life at this point.
I may share some of my work here, or on my Quiet Life blog, so if I do and you already possess the skills of drawing, painting etc please be gentle with me. 😁
To those who follow me I want to say a huge THANK YOU to you for still following me despite my sporadic posting! Life has a tendency to get in the way a bit and the last few years have had quite a few family and personal challenges to work through. I find it greatly impacts on my energy levels and combine that with needing to share my computer with Boar in the evenings and on weekends  – *gasp, shock, horror!* – it makes for less available time for me when there isn’t something else pressing, which seems to happen a lot during the day. First world problems eh?