Quite a few years ago I started taking some classes with Anne after I saw an ad in the local paper where as well as sewing she took pattern making classes. I’ve done some classes with her on and off over around 5 or 6 years. One of the first things I did were a trouser block (sloper), bodice block and then a skirt block. This post is on the skirt I made form the block.

I found some fabric I really liked, a lovely light chiffon, and a lining to go with it. I’ve worn it a lot but sadly it’s beginning to come to the end of it’s life  🙁

I never had any photos of it because I never thought to take any. Earlier in the year I joined some of the ladies from WSBN who were getting together for a Shirt Dress challenge. Well, a shirt dress isn’t really my style and quite frankly reminds me too much of the nurses uniform I wore way back in the ’80s, or a house dress my granny used to wear. So I chose not to make one. I know they’ve been modernised now and the ones I saw on the day were lovely.

I went to the second part of the day where we met at Te Papa for some photos. They have an exhibition on Air New Zealand and one of the things outside was a cockpit.

Of course, we all had to go up into the cockpit and sit in the pilots seat  🙂  While we were waiting Nicola of Piccolo Presents commented that she had the same fabric but in two other colours. I do remember there being other colours but it was the blue that caught my eye on the day.

Once we climbed out of the cockpit we found a spot to take some photos. I’m more used to photographing the things I make, usually for others, not being in the photo. Many thanks to Zara of Off Grid Chic for the photos. 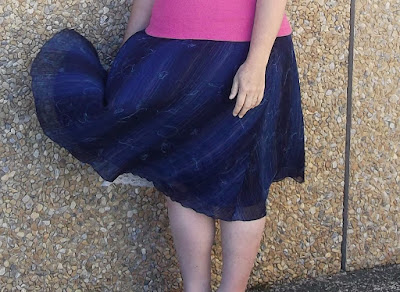 A simple A Line skirt, quite a breeze was blowing and being such a lightweight fabric it caught the breeze well! The lace peeking out is a separate petticoat or slip. I’m a bit of an old-fashioned gal and it gives me some modesty if the breeze lifts the whole skirt up, which it has done! Wellington can get some pretty strong winds! 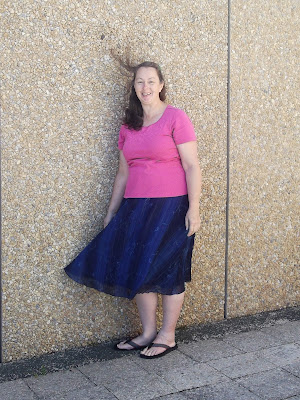 A full length shot as well. Despite the breeze it was a pretty warm day for March. After the photos we went for a wander up to The Fabric Store. I had a good look around as I haven’t been in there much. There was so much I liked but I restricted myself to a small purchase. 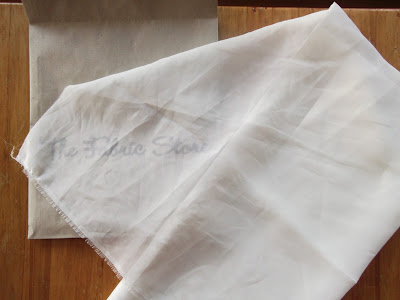 A metre of silk organza. Another thing towards my Tambour Embroidery supplies. Slowly getting the things together to make a start on teaching myself how to do tambour. These things take time you know, like a good wine or cheese!  😀

It was a fun session and I really enjoy getting together with the ladies in the WSBN.

A few days later I was wearing the skirt again on a sunny day. Coming out of the Johnsonville Mall onto the main road on my way to post some letters I was hailed by a couple of ladies sitting in the sun on a bench. I wandered over and smiled with delight when they told me how pretty my skirt looked with the sun shining on it and making it sparkle. It has a goldy thread running through it lengthwise.

I was quite chuffed to be complimented on one of my own makes. I have been asked before where I bought it and some folk have been surprised when they learned I made it myself.

I’ve got plans for quite a few things to make for myself . . . now I need some of that commodity called time! Or rather time to sew in.

Something weird seems to be going on with the blogger settings because the page looks fine in the draught set-up but on preview and the published post there are big gaps appearing after some of the photos. Most irritating! Unless it’s just my computer. Time will tell I guess.

0 thoughts on “An old favourite”