It’s been a couple of months since I wrote a post. I’ve mostly settled into studying and have also been busy with life in general.

Towards the end of 2016 I was asked if I could make a costume for a young girl, Miss J. It was a Peridot costume for her to wear to Armageddon & Comic Con. Never having heard of the character I was intrigued by the images I was provided with and did a bit of searching on google. If you want to know more you can look here. I figured out it is a cosplay costume. 😁 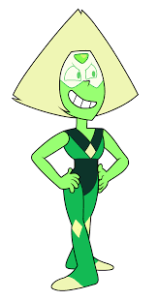 So this is what I had to make, although it was at the beginning of 2017 as Christmas and New Year intervened! The clients wanted it in two pieces as a leotard and tights which is a bit easier than a unitard. I pointed the clients in the direction of Dance Fabrics Direct whose fabrics I have been using for years for costumes. 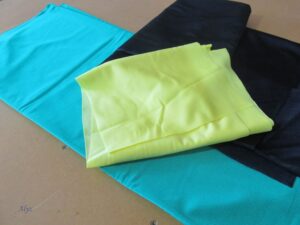 The fabric arrives! Measurements were taken and then I began the process of figuring out the pieces needed and adapting a pattern. Most likely a Kwik Sew one. 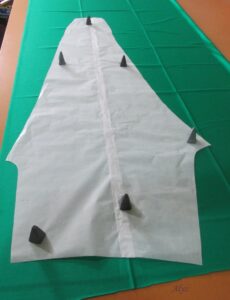 Ready to cut out the tights with my rotary cutter.

The pattern pieces and the fabric pieces cut out. 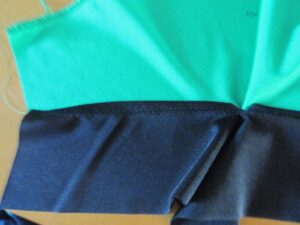 Attaching the black “vee” piece to the top part of the leotard. 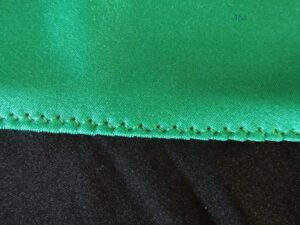 Under-stitching the “vee” so the green won’t show. I used a small zig-zag stitch to retain the stretch of the lycra. 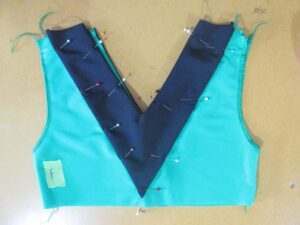 It’s usually pretty easy to tell the front of a leotard from the back but they were pretty much the same with this one. Since the top and bottom are different colours and both the front and back have the “vee” I took the precaution of labeling the front as you can see.

Unfortunately I forgot to keep taking photos, as I often do when I get in the zone a bit behind with the job in hand! So I don’t have any of the completed leotard.  😒 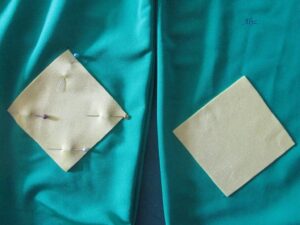 I had great fun working out the diamonds for the front and knees. I used a double layer of the yellow carefully bonding them together with fusible web. Then we had a fitting so I could get them in the right position when the tights were on Miss J. I marked the position with safety pins and then stitched them on with a zig-zag stitch. 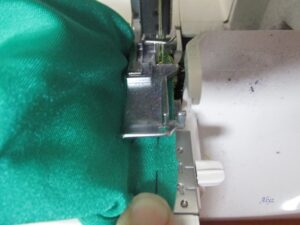 Stitching the yellow toes to the green feet was a bit tricky. I basted them first to make it a little easier. It was still a tight wee circle to overlock! 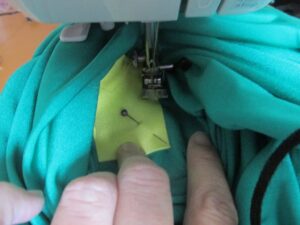 Stitching on the diamonds to the knees was also a bit tricky but with patience and taking it carefully I got there. Again I used a small zig-zag stitch so that the lycra would retain it’s stretch. Also I didn’t want to have to do any unpicking and re-stitching!

I forgot to take a picture before I delivered the costume to it’s owner. I did ask if I could take a photo at the time however Miss J was keen to only have a photo of the whole look. Fair enough as it included a wig which still needed to be purchased. I’m still hoping to get a photo and will post an update if and when I do.

This was a fun project and as usual stretched and added to my knowledge.