“The time has come,” the walrus said, “for Locket to have a new Classical!” Well, not really! Not a walrus anyway . . . I’m just being daft   ;;)  It was Miss Lisa who said it. Which meant a new tutu. No, wait! A tutu is traditional for a classical ballet dance. But not compulsory. It can depend on the dance.

Locket’s new dance was to be to music from the ballet Carmen, the music composed by Georges Bizet, originally for an opera.

Miss Lisa decided she wanted something a little bit different. Classical, Spanish style, wine/burgundy/maroon and black – and not a tutu!

Out came pencil and paper for drawings. Online I went, to look at lycra, chiffon and organza, and to the shops as well. Everything chosen and we – I mean I – was ready to start creating!

I decided to make a panelled leotard so I again based it on Jalie 2915.

All the patterns I had draughted off were of the upper bodice panels, and an attached pantie, which I used for the leotards below in 2011.

I did not want this leotard to have the seam line across the high hip because of the style of the skirt. I thought it would spoil the line of the leotard.

So I traced off the master pattern I had in the right size and went from there. I extended the seams down to the leg line on the front and the back pieces. 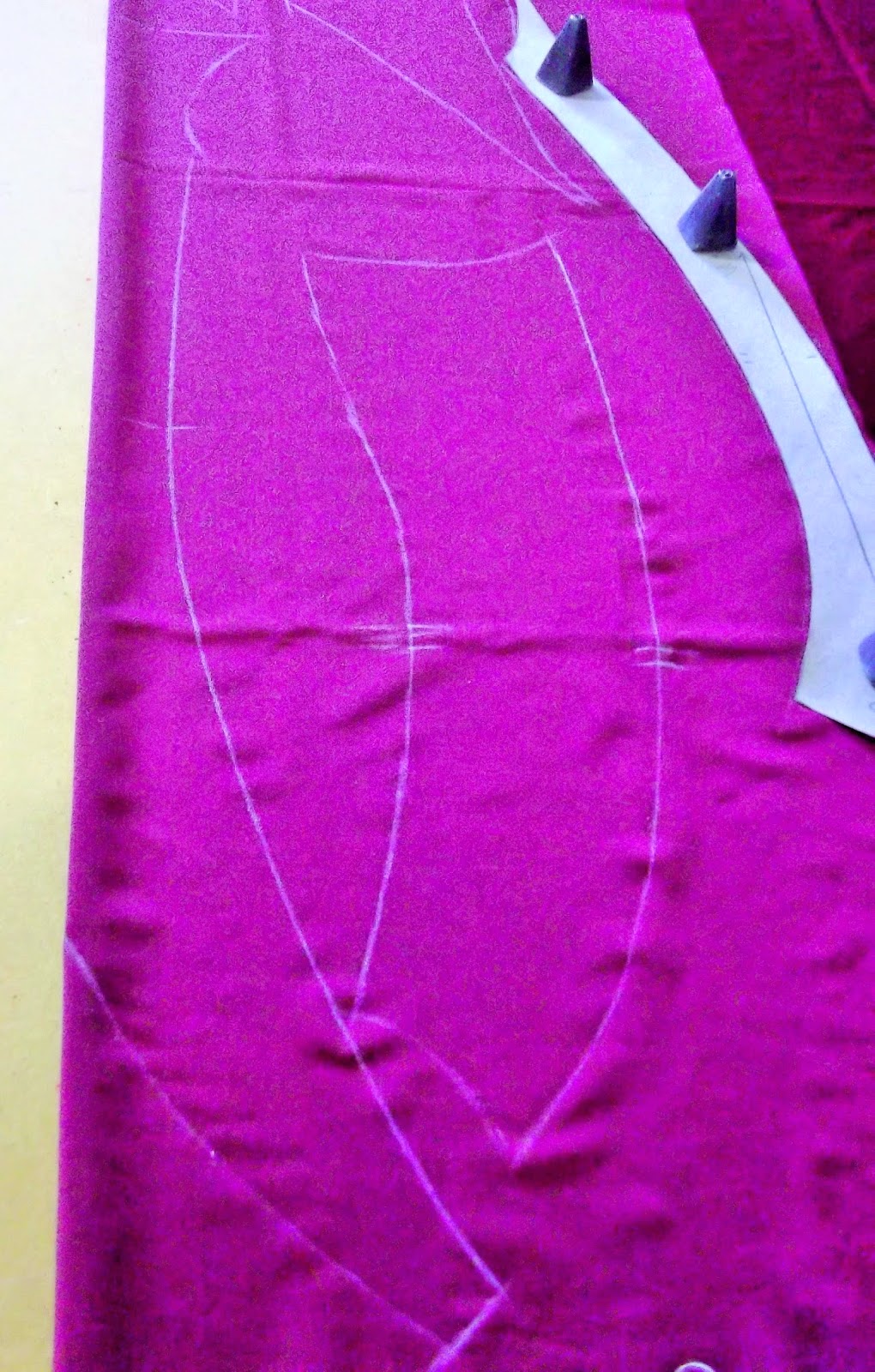 Here I’ve traced off some of the pieces with tailor’s chalk. Markings made so I join the right pieces together. Although after making a fair few of these I pretty much know the pieces well by now. I did put pins in before I cut the pieces out.  🙂 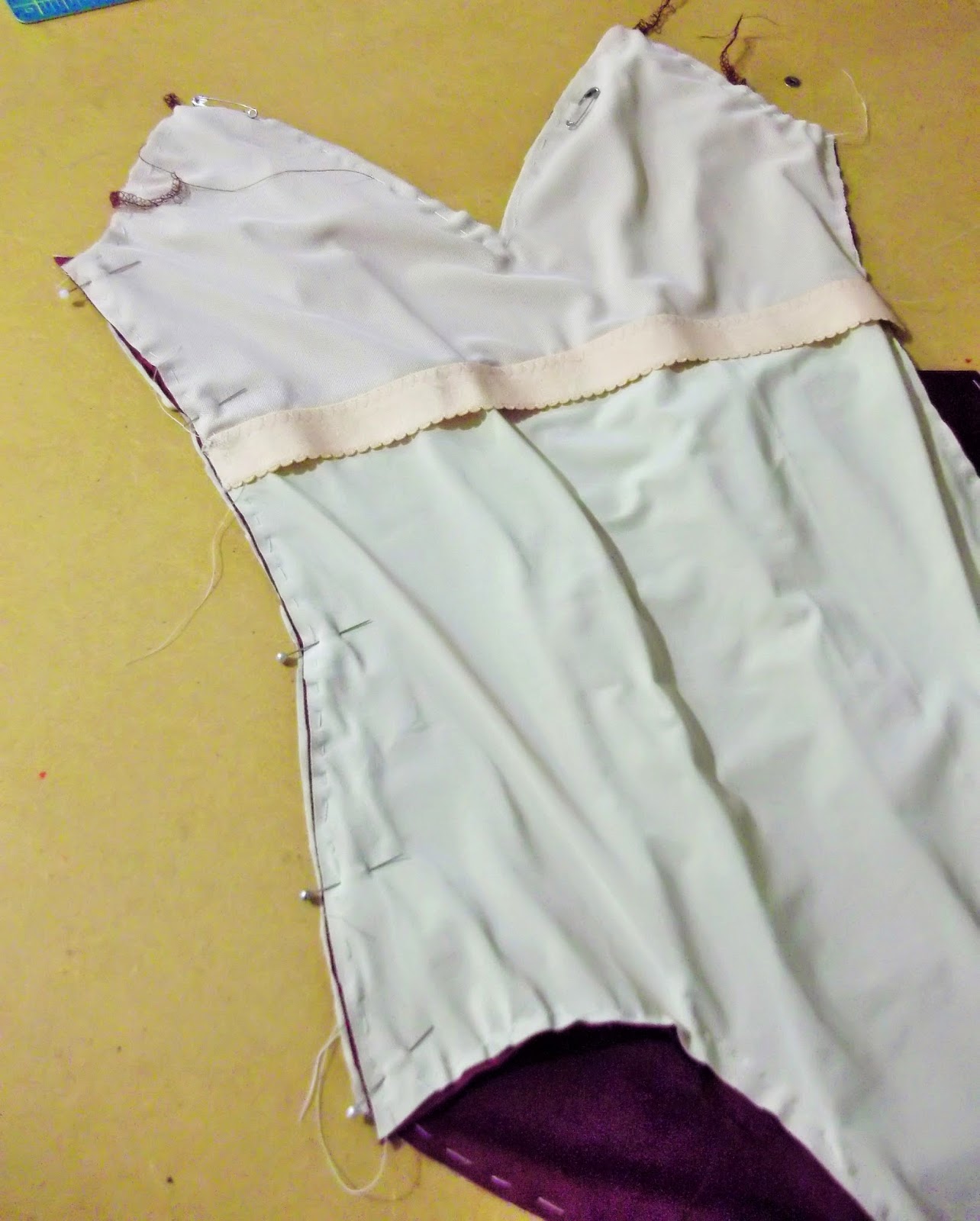 About to join the front and back together. This time I hand tacked the layers together. It didn’t take long and worked well. Again I put in a shelf bra. As you can see the lining is in one piece. No need to have it in panels as it is not seen! 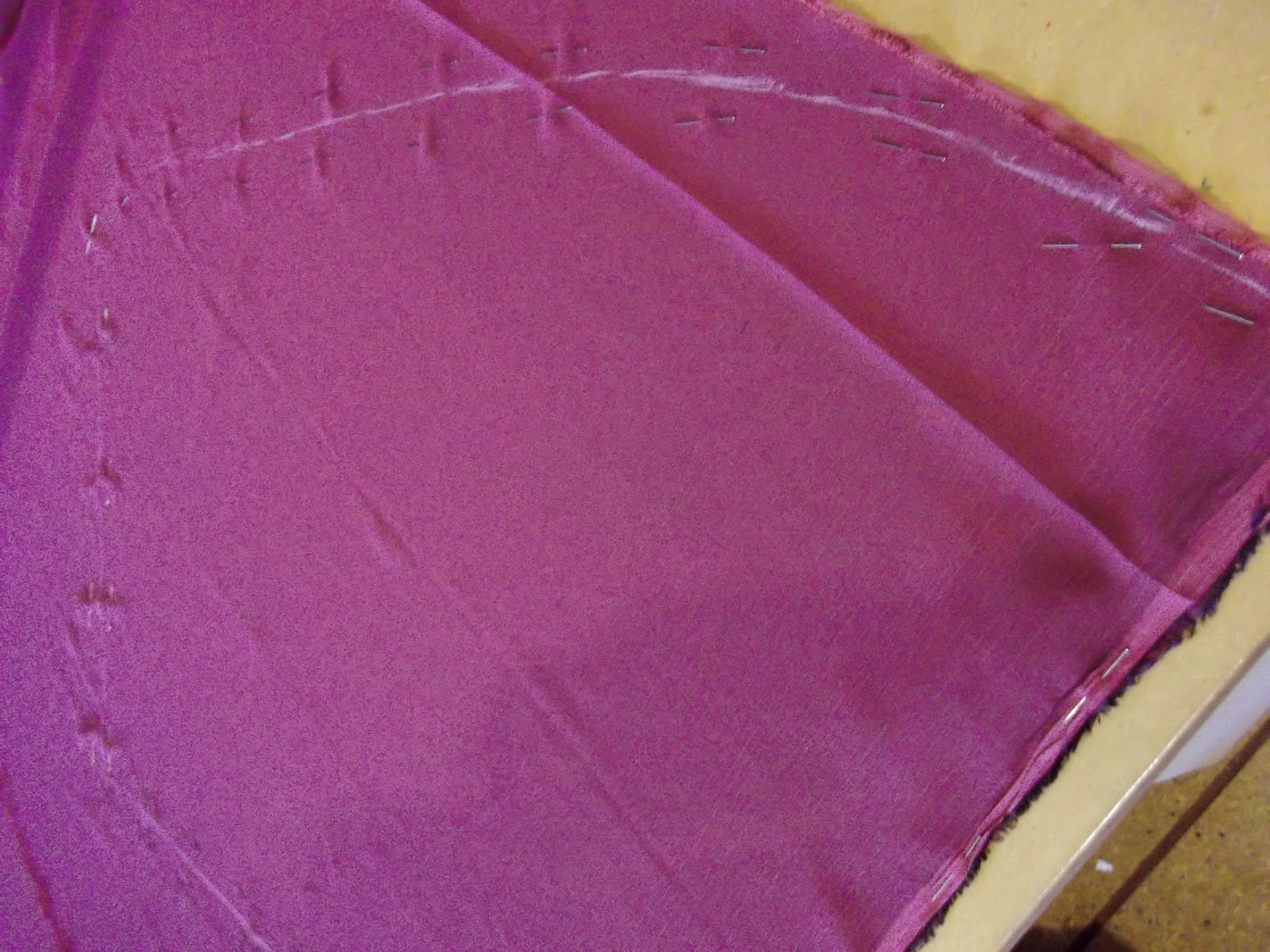 This is the chiffon top skirt. It looks a rather odd shape I know. This was a narrow chiffon so I had to put a seam down the middle of the back. I usually try to avoid doing it, but in this case I knew it wouldn’t be seen. I double pin the chiffon, on each side of the traced line, to help hold it while cutting it out. Chiffon has a terrible habit of shifting. I have heard you can use hairspray to hold it but haven’t been game to try it yet! 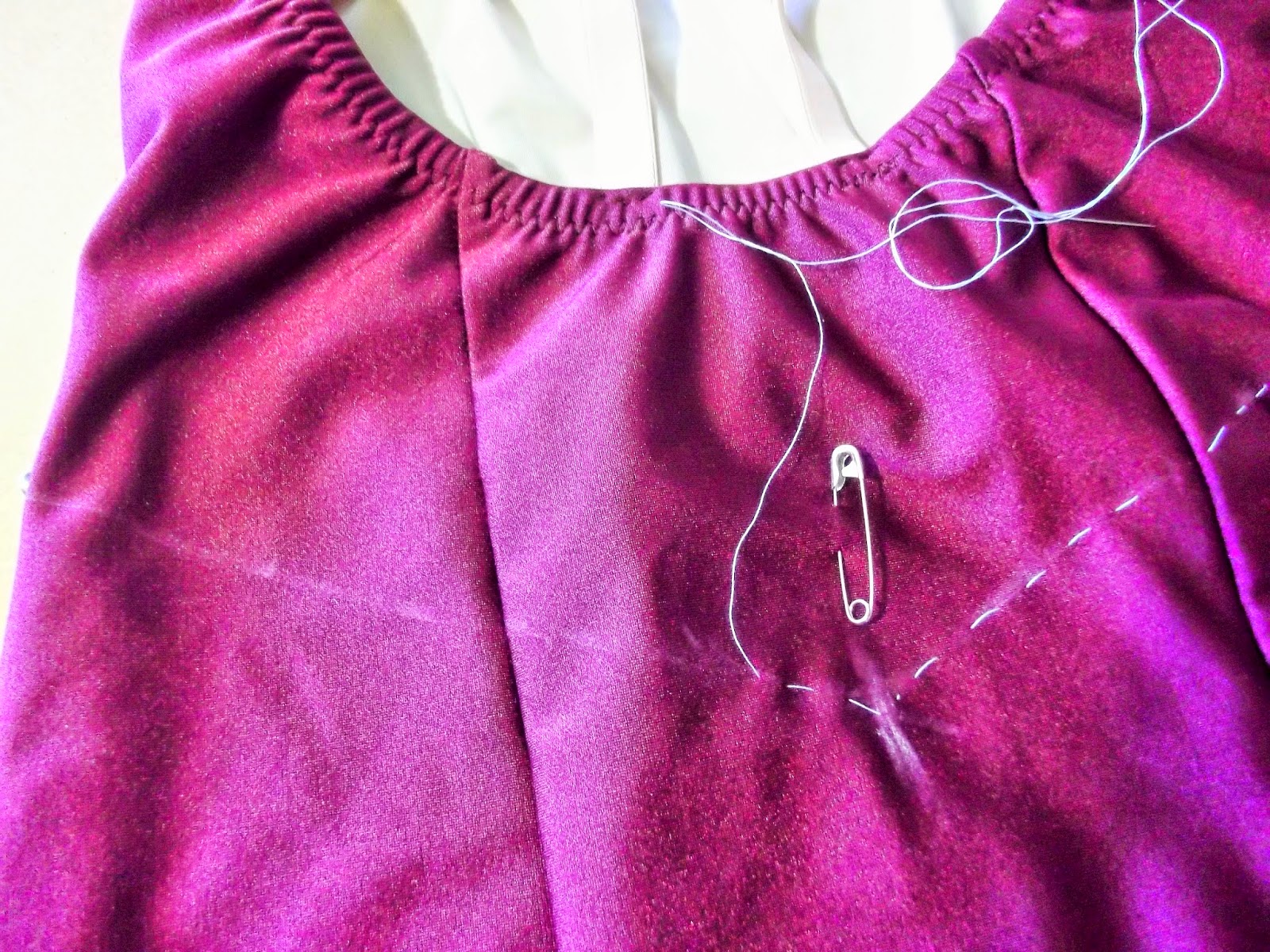 The leotard is all together and has had the elastic added. The safety pin marks the middle back. Here I’m making a thread traced line before I attach the skirts to the leotard. The tailor’s chalk would rub off and I wanted a clear line to follow. Miss Lisa wanted the skirts to dip as you can see, but not too much! She also wanted them only very slightly gathered on the sides, with most of the fullness in the back. All this required a bit of figuring in the maths department! 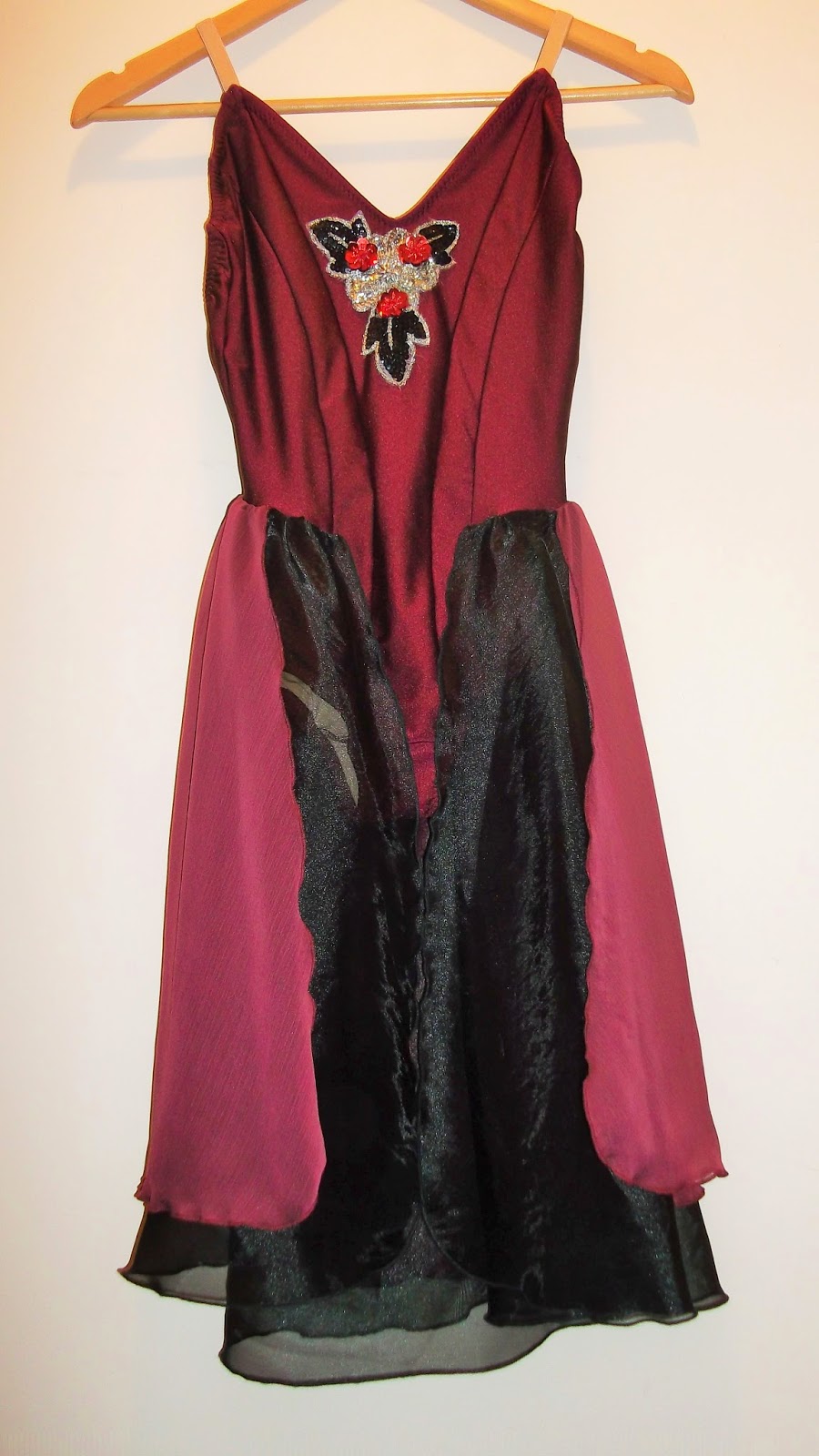 Here we have the finished look. The seams give the idea of a tutu and I was really pleased I’d decided to continue them right down. As you can see the black skirt comes in further to the midline. To get the placement of the skirts right I made a mock-up leotard out of some scrap lycra and then we drew along Locket’s high hip line and marked it where needed. The black skirt ended up pretty much on the side-front bodice line. It looks as though there is a mark on the black . . . but it’s just the way the light has fallen on the skirt.
The black is also longer and is organza rather than chiffon. It was the black that Miss Lisa preferred for a couple of reasons. I found around 5 black colours locally to choose from. Most were chiffon, and it was a more blue-black that we wanted. The organza had that tone and also had just enough stiffness to hold the burgundy chiffon out very slightly. 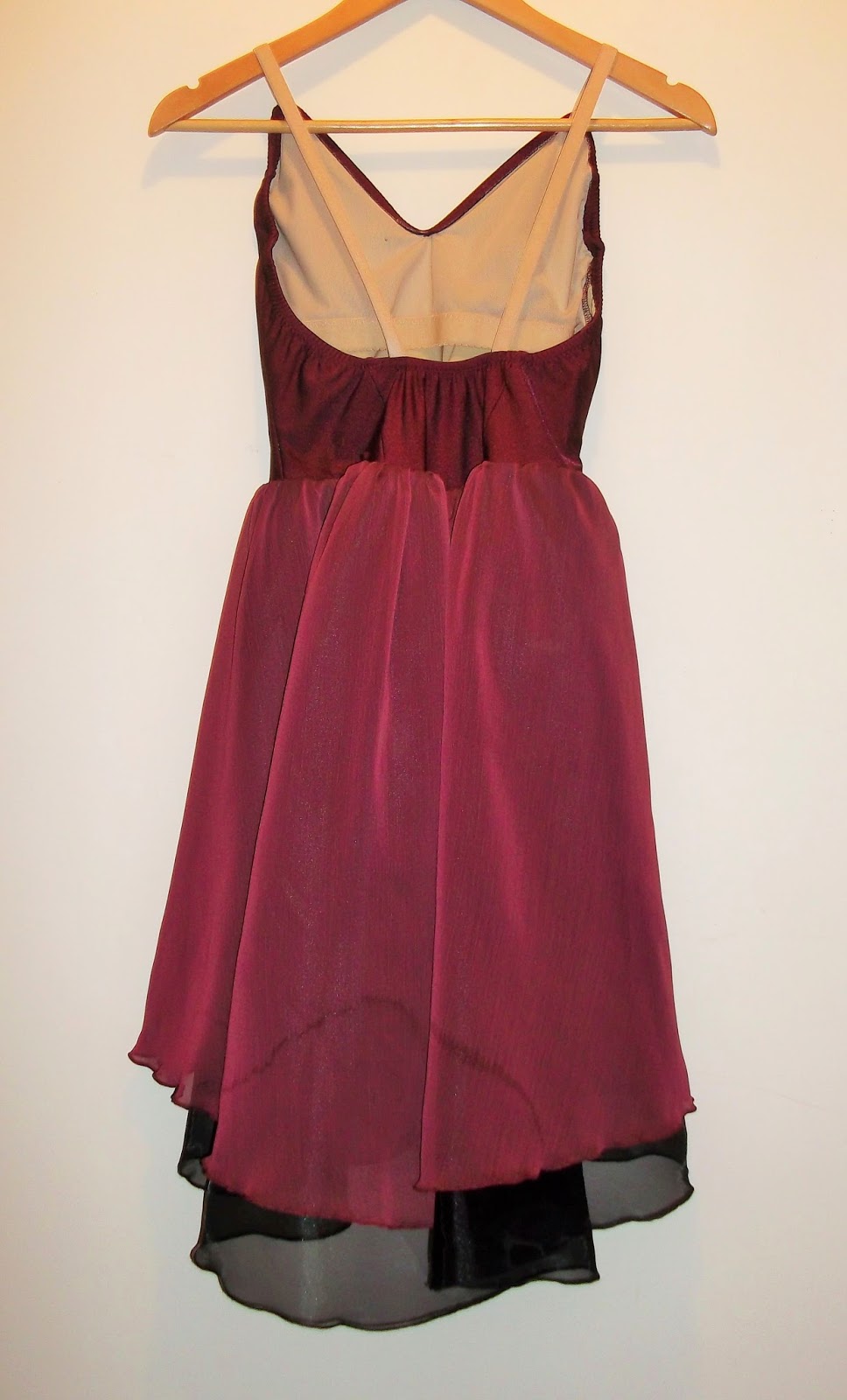 Whereas with the barefoot costume the skirts were stitched between the bodice and pantie, these skirts were stitched onto the leotard. I stitched them on upside down i.e. burgundy on the bottom, black on top with the skirts covering the bodice. Then when they’re all stitched on and you flip them down – voila! Black underneath, burgundy on top. You get a little bit of fullness too from the gathering  🙂  The look needed was achieved!
Hmmm, I just took the above two photos tonight and noticed there is a mark on the chiffon! On checking it looks like a watermark so best I hand-wash it carefully before the next comp.
Originally Miss Lisa thought of having straps the same colour as the leotard and crossing them. When I thought about it some more I suggested the plain flesh-coloured straps. I thought they would give a more classical look to the costume, as generally classical tutus have flesh coloured straps. When she considered it Miss Lisa agreed.  🙂

I got some photos at a comp. A costume always seems to look better when it has a body inside it! 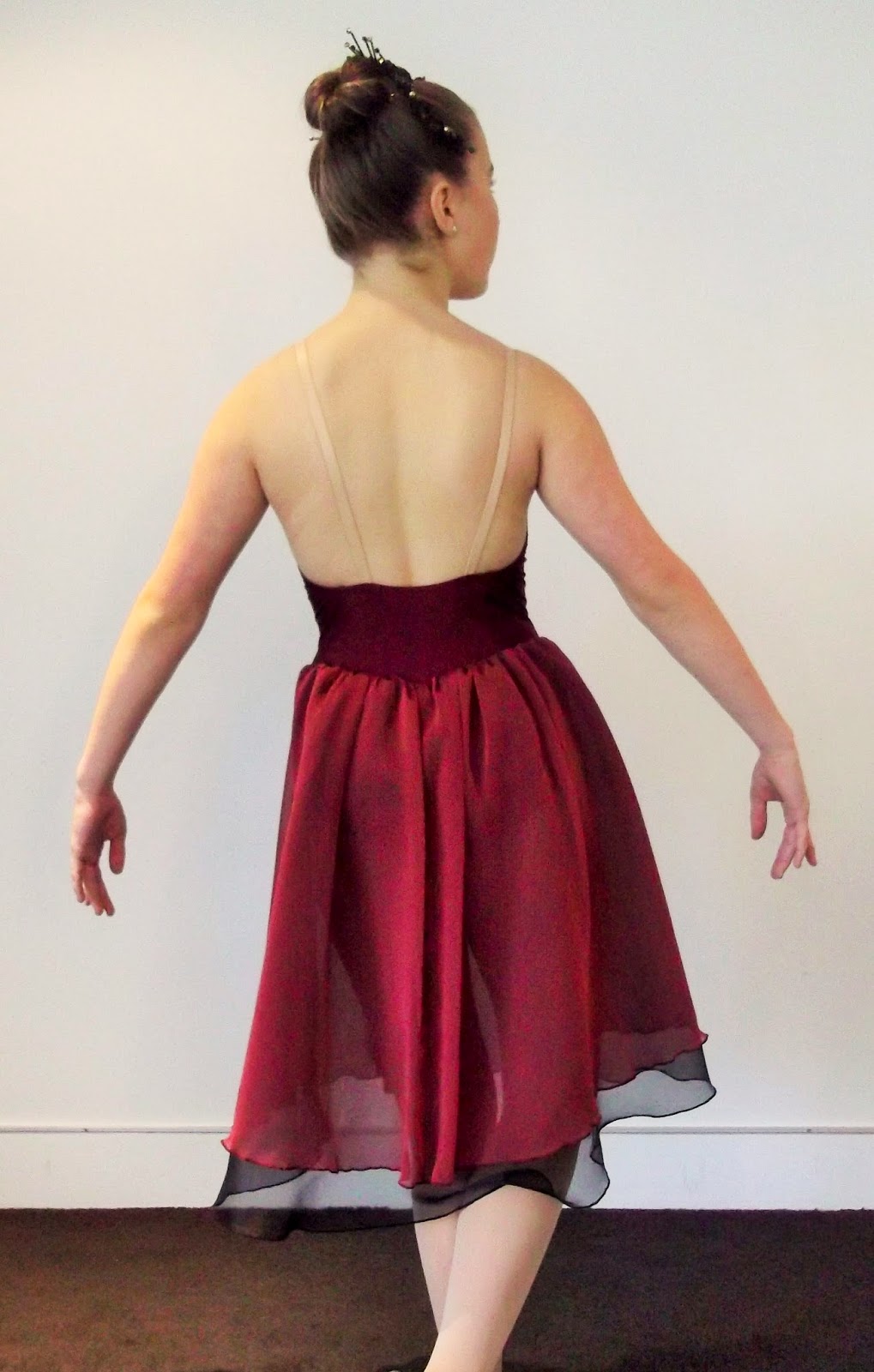 From the back you can see the low back, also requested by Miss Lisa, the slight fullness of the skirts and their slight dip. When worn on stage it has a lovely movement quality to it.  🙂